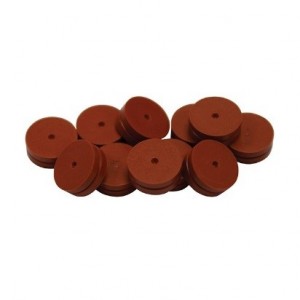 Our stringent QC testing of every batch of our premium low-bleed septa has led us to develop some pretty unique test methods. Because septa are made of silicone, they behave in a similar way to the silicones commonly used in the stationary phase of GC columns and even coatings on SPME fibers – that is, they make excellent absorbents for concentrating airborne volatiles. Usually, we view this as something to avoid and it is one of the many reasons that we strive to maintain a clean production environment. But, on occasion, we actually take advantage of this property to perform “grab sample” air testing.

We first used septa in an “air wave” test several years ago to track down contamination that appeared during QC testing of a production batch, see Figure 1 below.

Figure 1. (a) and (b): GC-FID chromatograms that a user would see if they placed 4 mg of BTO® septa ‘cores’ from a typical production batch inside the GC inlet initially (a) and then after the septa become conditioned (b).

Figure 1. (c) and (d): Corresponding results for a production batch that was flagged during QC tests due to unknown contaminants.

Figure 1. (e) and (f): Clean septa cores ready for an air wave test (e). The same cores after a 20 second exposure to lab air during the time that contamination was present (f).

This contamination was quickly traced to volatiles from interior paint used during building expansion. (These vapors dissipated quickly, and we controlled production to avoid contamination of product.) We’ve since used the air wave test to pre-qualify paints and tile adhesives before use in building maintenance – we take product cleanliness seriously. Occasionally, we’ve also used this method to “grab-sample” in a variety of bench-scale headspace experiments.

Of course, SPME has become a well-established sampling method since the late ‘90s and can also be used quantitatively. But if you don’t have a dedicated inlet for SPME and simply want to find out “what’s that smell in the air?”, read on to see how to make your own sampler. Note also that while sensitivity can be quite good using this DIY method, it can be enhanced further by using more cores or extending core exposure time.

Figure 2: Left, A core-holder being placed in the inlet. Note the bent sliver that forms a “hook” to hold the septum core. Make sure the core fits securely so it doesn’t fall into the inlet. Right, several cores punched from standard disc septa and the punching tool (sharpened steel tubing with paper clip inside to eject cores after punching).

Cut a thin strip of metal to fit inside a 4 mm ID single-taper liner (the taper is important to hold the core holder and catch cores that inadvertently come loose); a tin can will do for the metal and most scissors are strong enough to cut it. Make a short, angled cut into the side of the strip and fold it upwards to form a ‘hook’; this makes the ‘core-holder’. We’ve made core holders that can hold up to 4 cores at once.

Punch the cores from a clean, high-qualtiy, standard thickness disc septum (BTO® works well) with a sharpened piece of 1/16” x 0.04” steel tubing. You can use a paper clip to eject the cores from the tubing. A core from a standard 3mm septum will weigh about 2 mg.

- Pre-clean the core holder. Install it in the inlet liner of the GC or GC/MS and make a few programmed runs until the baseline is clean. (It’s best the first time to solvent-wash and bake the holder. GCs are sensitive.)

- Make a few programmed-temperature runs until the baseline is clean (see Figure 1b, d, or e). Use a splitless time long enough to collect volatiles before starting the runs; we’ve used up to 4 minutes. During this time, the inlet is heated while the column oven is cold to ‘catch’ volatiles released from the core on the head of the column.

- From this point on, everything needs to be very clean to avoid contamination from handling.

- With clean tweezers remove the core-holder, store in a clean vial (for example a baked EPA vial) and cover with aluminum foil. The vial with core-holder and clean core can now be taken to the sampling location.

- Use clean tweezers to remove holder with clean core from the vial, wave gently back and forth in the air for about 20 seconds, then return to the vial and cover with aluminum foil. If desired, sensitivity can be enhanced by using more cores or using longer exposure times.

- Pre-start (to close split vent) or start the GC run; quickly open the inlet and drop in the core-holder. Close quickly and complete run. (Inlets with a quick open/close mechanism work the best, but standard inlets also work if one is quick tightening ring nuts.)

We’d love to hear how this, or other DIY methods have worked for you. And of course, be sure to let us know if you have comments or questions!