This entry was posted on September 8, 2016 by David Jones. 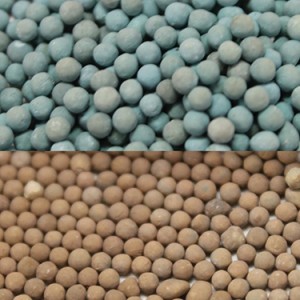 Many gas purifiers include internal indicators, usually for oxygen or water. They change color as they react with the contaminant, which signals depletion of the main adsorbent bed in the purifier. They’re popular because they let you know in advance when the purifier is about to give out. And naturally we assume that the indicators work. That is, that they change color at a very low concentration of the contaminant.

For our purposes we’ll say that “sensitive” means they change at 1 ppm or less of the contaminant. Sounds easy. They’ve been on the market for years, so they should work, right? The short answer is that oxygen indicators work; water indicators are all over the map, and hydrocarbon indicators are in a class by themselves and probably deserve their own post. (Spoiler alert: they barely work, if at all).

Now for the long answer.. let’s start with oxygen. 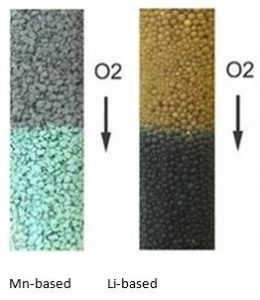 Most of these are based either on manganese or lithium. Manganese turns from green to gray as it reacts with oxygen, and lithium turns from black to brown. At CRS we use the manganese-based indicator in our indicating oxygen purifiers. The lithium-based indicator will also change color with some other reactive compounds, but since oxygen is probably the greatest concern to chromatographers, and it occurs in highest abundance in carrier gas cylinders, we’ll consider it as primarily an oxygen indicator. They’re both highly sensitive so if they’re changing color you can be sure there’s oxygen coming from somewhere! Because these indicators work, let’s go on to the more interesting case of ...

For decades a standard gas-drying adsorbent in the laboratory was calcium sulfate granules coated with cobalt chloride. The cobalt chloride turns color from blue to pink after enough water is adsorbed. We’ve heard of old water-removing purifiers in lab gas lines with the same blue indicator that has never changed, which seems to imply that they last practically forever. The problem is that the color change in cobalt chloride indicator is slight below about 2 – 3% relative humidity.. so it might go unnoticed. 2% RH is 500 ppmv water, much higher than  what will be found in an average compressed-gas cylinder of helium or nitrogen. Another problem is that cobalt chloride is now considered a “Substance of Very High Concern” in Europe so it’s use is increasingly restricted. It’s under intense scrutiny as a toxin plus it’s unhealthy for the environment. To move away from cobalt chloride several different indicators have been developed based on organic dyes. 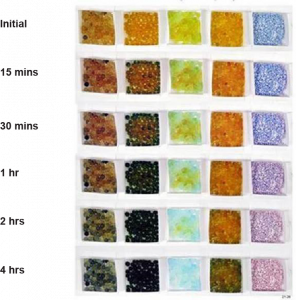 Currently indicators coated with dyes are available that change color from orange to green, orange to blue, blue to purple, or yellow to colorless, to name a few. There are also indicators based on inorganics other than cobalt, such as iron or copper. We’ve tested replacements for cobalt chloride-based indicators at CRS; here’s a simple comparative test. It was run by placing indicators out in into lab air with relative humidity of around 50%. The old standby is on the far right in the picture to the left. There can be a wide variation in batch-to-batch sensitivity. We’ve tested some batches that barely change color at 50% relative humidity.

Water is bad for stationary phases so it’s good to remove it from carrier gas. But because of the different sensitivities moisture indicators can have, one needs to be careful with purifier selection. As an example, we’ve tested a very popular replaceable-cartridge system that uses a yellow water indicator along with a green (manganese-based) oxygen indicator. The oxgyen indicator works great (though the cartridge as a whole could be the subject of another blog). 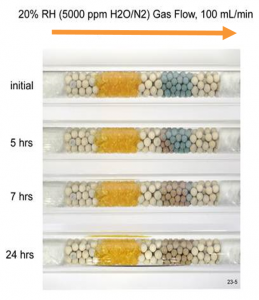 To test the yellow indicator we emptied it inside a dry-nitrogen glove box and packed it into a glass tube protected by dry molecular sieve, with our own high-sensitivity (blue) moisture indicator downstream of it. After flowing nitrogen through the tube spiked with 5000 ppmv water and saturating the protective molecular sieve, the yellow indicator barely changed, while the CRS HSMI indicator downstream of it was completely changed at 24 hours. Not much warning of trap depletion!

For our own product line we’ve done careful testing with known moisture levels of gas to select the most sensitive non-cobalt indicator, and offer that in some of our moisture-removing purifiers as “CoFree”. While it will indicate leaks that allow water in at the low percent RH level, we don’t recommend it for use with GC carrier gas lines. For that a true high-sensitivity moisture indicator is needed, which brings us to: 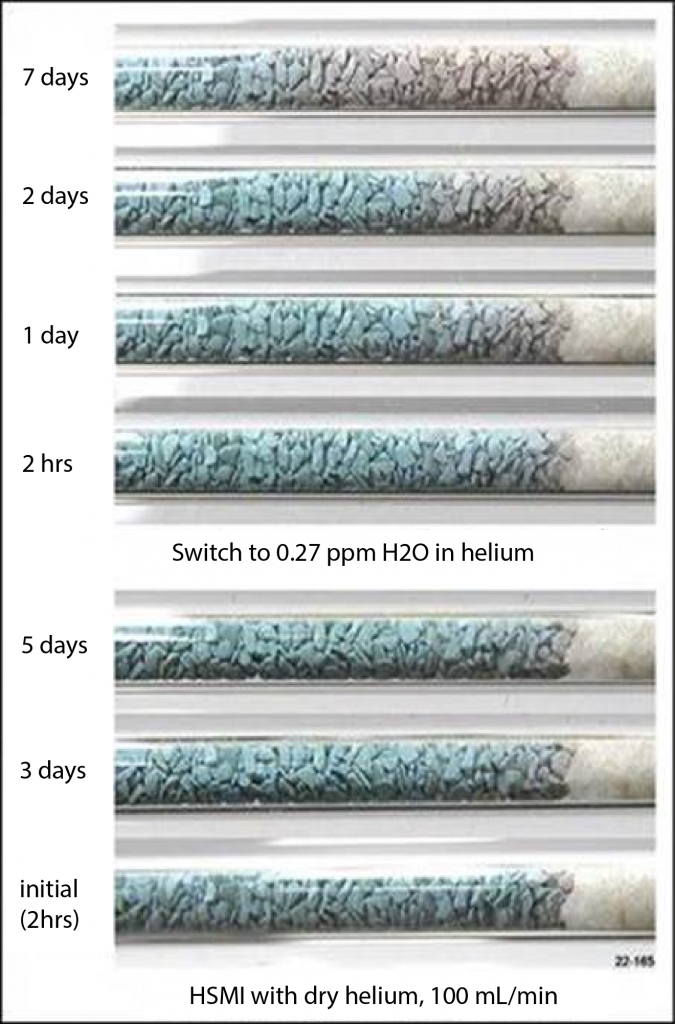 That’s what we call it! Or HSMI™ for short, which is easier to handle. HSMI is our proprietary adsorbent made in-house that changes color from blue to gray at less than 1 ppm water challenge. It’s used in our GC/MS-rated purifiers like the AFS and ZPure High-Sensitivity Moisture Purifier, and was used in the test above. Actually measuring gases and indicators with water at less than 1 ppm is difficult because of the way water molecules stick to everything, including transfer lines. To the left are are results of a test demonstrating the sensitivity of HSMI. View the pictures from bottom to top.

Water in the source gas was measured with a type M probe (GE Sensing) calibrated to -110°C. Dry helium was flowed several days through the HSMI as a “blank”. Initial trace water from packing the tube and the glass wool plug accounts for the slightly turned color in the inlet section of the bed.

Is the indicator in your gas purifier sensitive enough for the job it’s doing? Contact us at Sales@ChromRes.com or (502)-491-6300 if you have any questions regarding our products, or would like recommendations for your specific application.