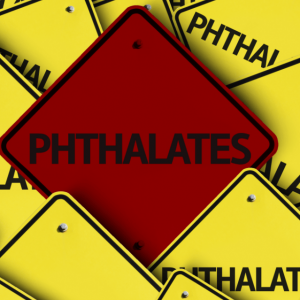 Phthalates provide an almost endless opportunity for fascinating annoyance in the lab. If you’ve ever found phthalate contamination in your samples and tried to track down where they come from, you’ve likely discovered they’re everywhere! - at least if you look at low enough concentrations. They’re also increasingly restricted or banned in manufacturing, and regulations for compliance can be murky to decipher. [1] Here are two case studies in our ongoing battle with these historically useful but hazardous compounds.

The high sensitivity achieved in gas chromatography these days depends on a pristine inlet. When unexpected contamination shows up, it is only natural to suspect whatever’s been most recently changed, be it a ferrule, liner or septum. One user found high levels of diethyl phthalate (DEP) in their samples soon after installing one of our septa, packaged in blister packs. Ergo the septum! However, we actively monitor phthalates at ppb levels in our products and packaging materials to keep them out of users’ labs. We considered this a crisis if somehow our processes had failed.

We jumped into action and tested a retain septum of the lot, which proved to be adequately clean, i.e. with no more than trace levels of any phthalates, so they were clean at the time of manufacture. A sigh of relief. But the septa we retain from every batch are stored in glass, so this didn’t necessarily prove that the customer’s septa weren’t contaminated during packaging. (Though this wasn’t likely since we go beyond keeping production areas spotless; we monitor our packaging materials and even go as far banning microwaving of plastic items in the lunchroom!)

Luckily, we were able to get the blister package back from the customer, and even luckier, one particular blister ‘well’ of the remaining unused septa was just slightly torn open (see photo below). So, we could test both a completely-sealed septum and this septum that had been exposed to the environment in the user’s lab.

Photo of slightly torn blister pack ‘well’ with unused septum inside, OEM marking is obscured. The small hole was made when solvent was injected to extract potential volatiles.

In the analysis of the injected solvent, we found virtually no DEP in the sealed well and a, comparatively, huge amount in the open well. We attributed this to vapor intrusion at the site where the package had been stored (maybe inside a drawer with some plastic things in it?). We were relieved to confirm that wherever it came from, it wasn’t in the package as sold. Mass spec results of the extracts are shown in Figures 1 and 2.

Figure 1. Solvent extract of partially-exposed well with septum run in single-ion-mode, showing characteristic m/z fragments of DEP. The compound was confirmed as diethyl phthalate in a separate full-scan run.

Figure 2. Extraction of sealed well with septum under same conditions as above, SIM. Note the different scale compared with the sealed-well run.

Case 2: Are we Meeting Regs?

Phthalates don’t just cause problems in laboratory samples. We make sure all parts, and sub-assemblies in our products such as the Electronic Crimper, conform to RoHS (the EU’s directive for Restriction of Hazardous Substances). Originally RoHS included four metals and two fire retardants. But as of 2019 an additional four compounds [2] are also restricted - phthalates!:

These are restricted to < 0.1% weight (1000 ppmwt). One might ask where phthalates could show up in a piece of electronic equipment? Hmm, what about plastic insulation around wires going from the battery pack to the motor, to keep them flexible? We checked…

Outer plastic sheathing was stripped from a wire and extracted with solvent. Weight loss after extraction was 26%, so there was plenty of extractable material available to potentially exceed limits (if some of it was the four regulated phthalates). Results are shown in Figure 3.

Figure 3. Wire sheathing extract by FID with overlay of a phthalates standard. All of four specified phthalates were well below the RoHS3 restriction level.

What were all the rest of the volatiles, then? GC-MS analysis indicates they’re mostly heavy (non-regulated) phthalates and tri-mellitates, plasticizers now used as alternatives to phthalates. We can discuss those in a future blog.