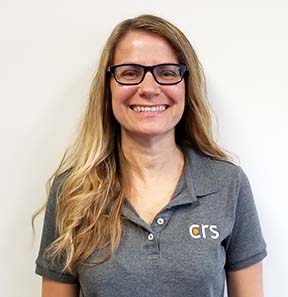 Introducing her in a new role, Roxanne Doyle, Account Manager.

Many of our customers have come to know and love Roxanne (or “Rox” as we call her) as the face of CRS. She started with CRS in 2002, making this April her 16th anniversary with us.

She had worked alongside our VP Debbie Clark at a prior job earlier in her career, and when Debbie found herself in need of a new customer service representative, she just knew that Roxanne would be a perfect addition to our company.16 years later, it would seem that she hit the nail on the head with that one, because we all know what a rock star at customer service she is!

As great as Rox is at her job, a lot of you probably don’t know the many other ways she “rock-stars” her life. (Yes I just used Rock-Starring as a verb!) This girl could dismantle and reassemble a car engine like a Pit Crew Pro!

Her passion for Ford Mustangs is deep rooted in her family. Throughout her life she can remember 5 or 6 that her family owned and another 4 that she has owned as an adult. All of us here at CRS know not to mess with Rox’s cars.  Any given weekend, you might find her at an NHRA race track getting her fill of top fuel funny car drag racing.

As if that wasn’t cool enough, she also runs marathons! She started running track in high school and still trains to this day! She has completed 5 marathons and countless half-marathons, 15K, 10K and 5K races.  She is married, and her and the hubby spend a lot of summer nights watching their grandson’s little league games.

She also reads the encylopedia….for fun! That might be  a little more on the weird side but we don’t judge here! The more you know!

With Rox’s vast knowledge of our products and customer history, it was no wonder she came to mind when we were in the market for an account manager. While some of her routine duties will remain, you can expect to see her in a more diverse role in the company. She will be working more closely with our distributors to further build relationships, as well as finding new opportunities for CRS.

And even though she is an Oakland Raiders fan (can’t win em’ all I suppose)… we have no doubt that she will excel in her new position and we look forward to what she will bring to the table!